Upon my arrival last year in December for a vacation from the northeast, I rented a cheap Diahatsu car for a hundred dollars for a week and started to drive across the island. There is one main road which encircles both the French and Dutch sides. There are hardly any traffic lights, and the cities become extremely congested during rush hours. As I got out of the Simpson Bay area by the airport the car’s main brakes began to get softer and softer on the hills.

The island is very curious and unique in that it’s divided in two with a more developed Dutch side and a more rural French side. There are casinos and Ocean liners on the Dutch side while there is hardly a bank machine, except in Marigot on the French side. 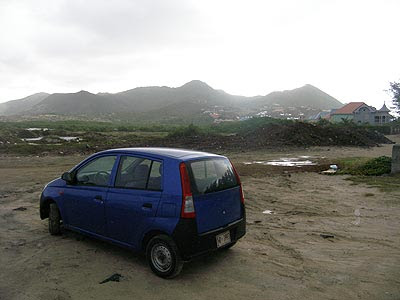 As I continued to drive it had become dark and I was lost, I came down upon a hairpin turn on Chamba Hill above the French Quarter by the Fish Pond and suddenly realized there was no brake fluid left in the car and no way to stop. At the last moment I managed to turn into a dirt driveway and back up the hill. There was a parking lot there next to an old plantation house with blue shutters which was a small restaurant. The owner of the restaurant came out on the porch and I explained what happened and asked if I could use the phone to call the rental company. The owner was an friendly man named Tony who had a gracious smile which immediately calmed me down. It seemed as though he ran the place and lived in the back of the house. There was one American couple eating on the porch. Tony gave me his phone and explained that there we was a separate country code to call the other side of the island. I called the number on my contract and they told me it would take about ninety minutes to send over a replacement car because of all the nighttime traffic near the airport.

As I hung up the phone I couldn’t help notice the incredible ambience the house had inside. There was something ghosty and comfortable about it. There were old bottles and artifacts like nutcrackers on the old cabinets and ancient pictures. There was a chess set in the other room. Tony was extremely hospitable and I decided to stay and eat out on the porch.

I struck up a conversation with the couple who wondered what had happened to me. They told me that Tony Romney was a famous chef who had once prepared a meal for both President Mitterand and President Bush 41 when he was a head chef in the late 1980s. They said there was a certificate on the wall inside. They had come back for years on end. Just as Tony brought chicken in an amazing homemade Creole sauce to the table, the wind kicked up and suddenly it was raining sideways. We all dashed into the dining room where I had used the phone.

Tony began to tell me about how the house was over a hundred years old and had the roof blown off in the past by a hurricane. The air seemed to pass right through it as it was up on the top of the hill. The couple soon left after the weather died down and Tony and I spoke about all sorts of things including New York and how his driveway had pretty much saved my life. I managed to spill some of my soda and he told me it was good luck.

The replacement car never arrived and after trying to call again with no answer I just gave up. Tony suggested that the car might have cooled down, and I agreed that I would just have to try it again and go back the way I came to find my hotel. I thanked him for his hospitality and the great food and went out to start the car again. I double checked the handbrake and realized it might be on even though the light wasn’t. I tried to just will that the car was not broken, and this seemed to work Tony had been right. 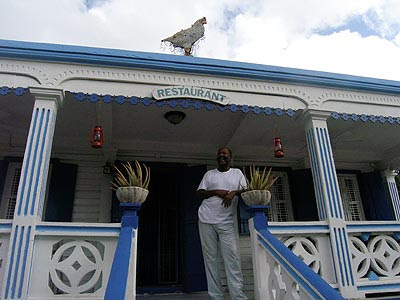 Five days later as I headed back to the airport I stopped by and said good-bye to Tony Romney and took this picture. He remarked about how much more relaxed and how much healthier I looked from the first time I saw him. He was correct. If you get to the east side of the island are near Orleans section look for Poulet d’Orleans ”“ Creole Restuarant above the hairpin turn. You will not be disappointed by the atmosphere the hospitality or the food.